Infuse Exotic Flavours To Your Food With Aromatic Spices 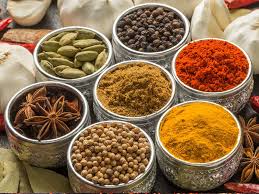 Spices are the taste enhancers that make any food delicious. There are a wide range of spices available in the market. And, some of the common and essential ones are chilli, clove, black pepper, cumin, coriander, nutmeg, mustard, fenugreek, turmeric, and so on. These spices are used in both powder and whole forms as per the type of food that is being prepared. Without spices, the food becomes bland. However, some people like it that way but not all. In India, spices are commonly used in every form in almost all dishes. Without them, the food is not complete and remains tasteless. So, spices hold a great importance in the domain of cooking.

Spice is the name attributed to any dried part of a plant. It is used for seasoning and flavoring different types of recipes. The culinary art is simply incomplete without the use of spices. At present,

India is producing around 75% of the world’s spices. Some of the major types of spices are:

• Black Pepper: Used in both whole and powdered forms, black pepper forms one of the major ingredients in diverse recipes. It is native to India but used worldwide for flavoring different types of food items. It has a peppery taste.

• Red Chilli: Red chilli is used for adding a spicy flavor to any cuisine. Red chilli can be used in both powdered and whole forms as per the preparation requirements of the recipe.

• Clove: It is one of the most common spices that are used in diverse Indian recipes. It has a strong and medicinal flavor. Cloves can be used in both dried and whole forms.

• Cardamom: The flavor of this spice is light and sweet. Thus, it is widely used in the preparation of different food items. It is one such spice that is used in both sweet and savory food items.

• Cumin: Cumin is a spice that is widely used in different food items. It adds a characteristic smoky flavor in diverse Indian dishes. Its intense flavor makes any savory delicious.

• Coriander: Coriander seeds are aromatic assortments having citrus notes. The whole coriander is used as a base for preparing different powdered spices. Coriander is also used as whole and in powdered form in different food items.


Apart from the mentioned above, there are different types of spices such as nutmeg, mace, mustard seeds, fenugreek, turmeric, saffron, and various others. To know about the best spices suppliers in Unjha, one can check different online websites.